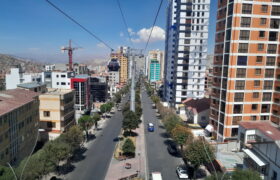 Bolivia, landlocked country that is dominated by the altiplano (high mountain plateau), that belonged to Peru until 1825 (place called Alto Peru), yet possessing plains and valleys, and whose ethnic roots are Aymara (pre-inca from Peru). It boasts a mixed legendary heritage that both grants the country its identity and engages it in a deeply rooted syncretism. Bolivia possess 40% of the Lake Titicaca, 12,000km2 the Uyuni salt flats, the Andes, and the Amazon. The City of La Paz, the majestic Illimani mountain and its surroundings can transport you to a mysterious past where any place is a hidden treasure, where adventure begins. A living history which treasures the pre Hispanic times with all their traditions and magic rites on its streets. The indigenous, colonial and modern areas, Indian Market, are breathtaking panoramas from La Paz. In Bolivia its churches, mansions and monuments have been declared Cultural Heritage of the Nation. The Moon Valley is a clay formation resembling the face of the Moon. In Bolivia there are colonial churches, haciendas & mansions, and monuments that are part of the country’s cultural heritage. Visit the cities of Sucre, La Paz, Santa Cruz, and Cochabamba because Bolivia is world famous for its folklore and its dances.

The magnificent construction of Tiawanaco and cradle of the andean civilizations (1580BC–1050AD). The Sun Gate, the Temple of Kalasasaya and the Pyramid of Akapana are the sample of a glorious past. Tiawanaco culture was an agrarian based economy with an estimated population of 115.000 inhabitants. The state controlled agriculture, produced the surplus wealth to support the urban centre and administrative system. The Tiawanacos (people) were outstanding in agriculture, hydraulic, architecture & medicine, as well as in social organization. Beside the construction of Tiawanaco lies Puma Punku (Stone gate) which is also part of this culture. It seems to be the remains of a great port on Lake Titicaca and exposes stones over 440 tons. It is said that Tiawanaco collapsed around 1.050 AD due to drought, which caused an economic crisis and lasted for a long time. Unesco has declared Tiawanaco Cultural Heritage.

Uyuni, place where you will enjoy the miles and miles of dazzling pentagons of crystalline salt, considered one of the largest salt flats of the Earth which is Uyuni (12,000 km2), also visit Fish Island (Isla Pescado) from where enjoy this isolated ecosystem. The spectacular Salt Flat of Uyuni in Bolivia is the largest on Earth, comprising miles and miles of dazzling white nothingness that visitors admire. Active volcanoes, hot springs and a colored lakes populated by flamingos punctuate these landscapes forming a rainbow of colors between plains and stunning deserts. The silence makes the heart beat faster and the surreal pentagons of crystalline salt will make you feel that there is no other place as this one in the whole world. Besides the Salt flat of Uyuni, lies the train cemetery outside of Uyuni village.

Emerging from the Lake Titicaca, which is surrounded by the Royal Range of the Andes, one of the most important life sources of Bolivia, cradle of ancestral cultures. A most fantastic experience is to meet authentic cultures living as they did thousand of years ago, close to Mother Nature, without challenging or hurting her; to walk in the solitude of the islands; to enjoy the hospitality. Sun Island. Feel the magic of the island, by tasting the water of the Sacred Fountain, which it is believed to grant eternal youth and happiness. Sun island offers a breathtaking view of the Lake and the Royal Range on the Andes. Besides enjoy the nocturnal beauty of the island, from the Catamaran or the ecolodge “Posada del Inca”, located on the top of Sun Island. The Chinkana (subterranean labyrinth) on the northern side of Sun Island which is a most fabulous experience, since it is the most impressive archaeological monument of the island, where it is believed that these constructions were used by priests guarding the sacred site. Moon island. This island is considered a magical place where are located the ruins of the Iñak Uyu (Temple of Sun Virgins), where the most beautiful maiden of the Incas where chosen to become the wives of the Inca nobles, in devotion to their Inca God, wiracocha. Copacabana. Town located on the shores of lake Titicaca, with a population of 3000 inhabitants, where lies the church of Copacabana, the most important religious sanctuary in Bolivia built between 1601 and 1619 and rebuilt in 1610 and 1651, visited mostly by peruvians. In adittion the Dark Virgin of Copacabana and to the local artisans market, Copacabana is the point of link to Peru, for those who want to visit Uros Islands (150 km) a car trip of 3 hours, and Machupicchu (530km).